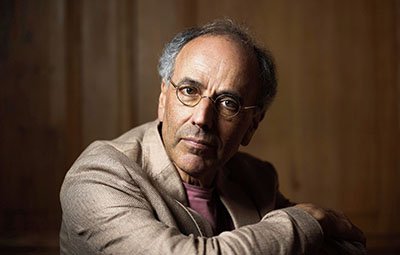 Ed Spanjaard was the principal conductor of the Orkest van het Oosten and the Nieuw Ensemble. Both of these ensembles will cease to exist. Conductor Ed Spanjaard (70), however, refuses to be despondent. His response: agile optimism. ‘Next week I’ll be picking up my flamenco dance classes again.’

Ask conductor Ed Spanjaard what he is looking forward to, and he will present a long, energetic list. A concert trip to Venice with the Atlas Ensemble and its musicians from China, Japan, Central Asia, the Middle East and Europe. ‘The eagerness this ensemble has for making music that transcends language barriers often moves me deeply’, he says. ‘There are no borders in music.’

He is also looking forward to a belated début with the Munich Symphony Orchestra, and to performances as a pianist. And to holding a speech for composer John Adams when he receives the Erasmus Prize at the end of November. Then there is also a production of Smetana’s opera Die verkaufte Braut in a ‘hip Dutch translation’ with the Dutch Touring Opera to look forward to next spring.

‘There is so much’, he says, and then hops up the stairs of his Amsterdam home in a single bound, singing, to look in his study for the scores with which he can underpin his enthusiasm. ‘Look, do you see this motif? Edward Elgar captures the portly Falstaff perfectly in a striking musical character sketch: witty and sharply portrayed. It’s amazing how dull this opening theme sounds in most performances. I’m going for a different approach in Munich next week.’

A year ago, his response would not have been this elated. The farewell to the two ensembles of whom he was the permanent conductor, the Orkest van het Oosten (due to a merger with the Gelders Orkest) and the Nieuw Ensemble (disbanded in December), filled him with ‘incomprehension, sadness and anger’.

‘When I graduated from secondary school my parents gave me a super 8 camera, which also had a reverse mode. Is that my destiny, I thought, going backwards? But once my emotions subsided, I knew: no, it isn’t. When I recently took the lift at the Amsterdam conservatory, I felt like Charlie in Road Dahl’s Charlie and the Great Glass Elevator. That was a moment of pure lucidity. I knew then: I’m not going backwards; I have my imagination. That will take me anywhere I want to go.’

Isn’t that a poor consolation for a conductor with your resume?

‘My diary is full. Not crammed, to be honest. I’m looking for a new agent to represent me abroad. But I don’t feel disadvantaged or gloomy.’

I hear top-classes orchestras referring to many conductors as ‘hot’ but they but do not match your quality. Why has it been so long since you conducted the Concertgebouw Orchestra, the National Opera or the Rotterdam Philharmonic?

‘That’s a question to which I don’t know the answer. I admit I’d love to get back to all of them. The Concertgebouw feels like home to me, the Rotterdam Philharmonic is great, and I’ve conducted the DNO on many occasions in the past – I would love to do it again. But it’s simply not up to me. Still, if you were to ask me if I think I’m good enough for top-class ensembles like these, here and elsewhere, then I’ll say “yes” wholeheartedly. That is the extent of my modesty.’

You don’t have an explanation?

‘It partly has to do with the fact that orchestras attach great importance to youth, to external factors. Like you just said; to whether or not someone is “hot”. That can be frustrating. So, I’m thinking of getting myself a blond, curly wig and then maybe some piercings. Ha, that should cause quite a stir!’

And behind the charming armour of black humour you will find …

‘…that being older has almost nothing but advantages for a conductor. I may be 70, but I’m still pretty fast. When I’m doing Pilates exercises, you won’t hear my joints cracking any louder than other people’s. I’m still always the first cyclist to sprint away at the traffic lights. And then I look at all those younger people with their headphones and think: no talent for conducting! A conductor must react quickly, be constantly alert. And maintain a clear overview and stay calm at the same time.

‘When you’re young, it can be difficult to relax in front of an orchestra. Will they ask any difficult questions? Thoughts like that can make you really tense. At my age it’s easier to preserve your natural sense of playfulness. And that’s important, because playing music is also playing. You need agility, flexibility. This applies not only to how you are as a musician. Some people become a caricature of themselves over the years. I don’t want that.’

‘I don’t have a clear picture in mind. Let’s just say that all artists are egocentric to a certain extent. But you also have real narcissists, who brandish their personality around, like some of those people you see at supermarkets who leave a trail of hair conditioner and smoothies that wafts all over the other shoppers. It’s a bizarre metaphor, but I would never want to be someone like that.’

Behaviour like this may be necessary in your profession. Look, here I am, book me!

‘I’m afraid you’re right. But that’s not me. Other aspects of life have plenty to offer me. Friendship, books, the three beautiful paintings I just bought and which make me profoundly happy. And I’m also looking forward to taking up my flamenco dance classes again next week.’

People used to associate the conducting profession with autocrats. How do I reconcile your amiable attitude towards life and ability to put things into perspective with your task: to impose your vision of how to play a certain piece of music on a hundred highly educated and experienced musicians?

‘As a conductor, I am resolute. Not that I rule with a hard hand, but my musical ideas are crystal clear to me and the desire to hear what I imagined in my head when studying my scores gives me wings. On top of that, I am not afraid to speak my mind, but conducting is more than that. Conductors who lose themselves in small talk during rehearsals often lack power in their gestures. A good conductor communicates with his arms, hands, body and eyes. This will get you a lot further than words alone, provided you’re good in the first place.’

What about Frans Brüggen, or Harnoncourt? Many baroque conductors are better with words than gestures. With great results.

‘Yes, but when they speak they share their vast knowledge of historical performance practice, full of witty and idiosyncratic imagery. I’ve attended hundreds of rehearsals of great conductors and written down everything they said.’

‘A musicology student assists me every once in a while by taking stock of and indexing my hundreds of scores. It’s often nice to look at, for inspiration. But this only applies to a certain extent. When I conduct Beethoven’s Fourth Piano Concerto next week it will be from a clean, new Urtext edition score. Everything will be in my head.’

Have you ever felt any hesitation in conducting?

‘No, I was lucky that my family members made a lot of music and the conductor of the school orchestra understood my fascination for conducting. He gave me a chance to try it out and except for an uncomfortable cramp in my shoulders everything felt natural and good right away. That was his reaction too, by the way.’

About your childhood. Your mother survived Auschwitz. How did that history affect you and your family life as a child?

‘That is a huge topic. My mother was fortunate to meet my father shortly after the war. He had just started out as a psychiatrist and soon realized that you have to talk about a trauma like this in order to process it. So, my mother went into treatment. She spoke of her experiences often at home, and at schools later on. It was a terrible past, but she was open about it.

‘By the way, it wasn’t just Auschwitz that was horrible, coming back to the Netherlands was too. People said: “Oh, how terrible for you, but we didn’t have enough potatoes here either”.’

Do you still dare to talk about your own fears and sadness as a child?

‘Perhaps that is difficult. Don’t be too conspicuous. Yes. But when I’m standing in front of an orchestra, I’m there, I’m allowed to be there to do the music justice.’

But that’s as a conductor. In the service of music.

‘That’s true. I suppose that what you are saying plays a big part in who I am, and how I am. But it is difficult. I’m good at thinking about myself, but there’s one aspect I can’t reach.’

Will you become a sort of Bernard Haitink or Herbert Blomstedt – conducting well into your 90s?

‘As long as I remain limber in body and mind, I will go on. When I become too stiff, I will work less. But fortunately, that’s not an issue.’