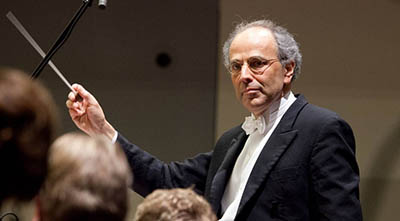 Striking the right balance between passion and precision is, without a doubt, a difficult feat in music. However, the troops occupying the Concertgebouw stage on Sunday clearly had no problems with this. Together with their principal conductor Ed Spanjaard, the Orkest van het Oosten performed a confident tightrope act across the invisible line that separates passion from intellect.

Already in the musical miniatures of Debussy’s Children’s Corner, the Enschede-based orchestra was able to display an utterly charming palette of colours. That was just a foretaste of the timbral explosion that followed in Ravel’s Piano Concerto in G, with pianist Severin von Eckardstein. The soloist delivered a volley of pure acrobatics and supple interaction with the conductor and the orchestra. In between the direct skirmishes and cascades of pearls emanating from the piano, the ensemble was able to raise an invisible curtain to create a spatial illusion of sound, like hazy panoramas. The controlled sense of mischief in the final movement was sublime.

Tchaikovsky’s Sixth Symphony, the ‘Pathétique’, was interpreted very convincingly, without ever losing sight of the overall structure. Nevertheless, it was the details, here too, that brought the greatest pleasure. The various groups of instruments glorified in scintillating yet homogeneous harmonies, first in the exceptionally transparent basses and later on the brass section as well. Spanjaard, a seasoned conductor who has been standing in front of this orchestra for less than a year, has raised the ensemble’s already quite decent level tremendously. It is a great pity that the orchestra will be merging with the Arnhem Philharmonic Orchestra next year. Although this is certainly a good orchestra as well it doesn’t mean that if you mix two different dishes together the result will be tastier.